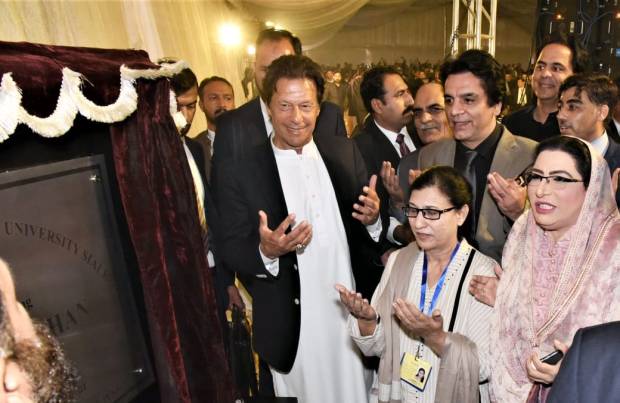 SIALKOT, Nov 28 (Ijaz Hashmi): Prime Minister Imran Khan on Wednesday reiterated his commitment to empower youth and determined to spend more resources for youth to pull out the country from economic crisis.
He expressed these views while addressing the ground-breaking ceremony of Government College Women University Sialkot (GCWUS) at Aiman-e-Bad Road.
” The nations which evaluate the people and invest on the people could lead among other nations; he added.
The prime minister said that the major problem of the country was big population and if we could provide higher education to current population, it could lead the country towards progress.
Putting the example of Singapore, he said that Singapore possessed approximately 30 Lakh population with export of 330 billion dollars. At the other side of the coin, we possessed 21 Crore population with only 24 billion dollar export.
He said that Singapore government invested in educational sector and annual budget of a Singapore University higher than the budgets of all national universities.
He said that US was not a super power 100 years back but in 20th century, US appeared as super power because it spent a lot in the field of education.
He said that US universities produced graduates enabled the country towards excellent progress.
He said that US was leading the world due “knowledge economy” and spent more investment in higher education.
The prime minister said that the world in experiencing new things including “Artificial Intelligence” in IT Sector which changing the world.
” We get a chance to invest in “Artificial Intelligence” in IT sector and in higher education to lead the country as developed nation.” he said.
He said that Pakistan ranked as behind the developed nations because Sub-continent did not invest in education and on the generations.
Criticizing on previous government, he said that we would cut the ribbons of universities instead of roads.
He appreciated the roles of all those personalities who converted GCWUS from a school to university.
Punjab Chief Minister, Usman Buzdar, Foreign Minister, Shah Mehmood Querashi, Federal Religious Minister, Noor ul Haq Qadri, Railway Minister, Sheikh Rashhed, Advisor to Prime Minister on Youth Affairs, Usman Dar and others were present on the occasion.

Correspondent at Daily Jang Group Studied Bachelor in Journalism at The Punjab University Past: Murray College, Sialkot and Govt. High School Head Marala Lives in Sialkot, Punjab From Sialkot, Punjab Follow me : https://twitter.com/ijazhashmi15 Like My Page ... https://www.facebook.com/journalistpakistan Facebook .. . https://www.facebook.com/ijazhashmijournalist
In the spotlight